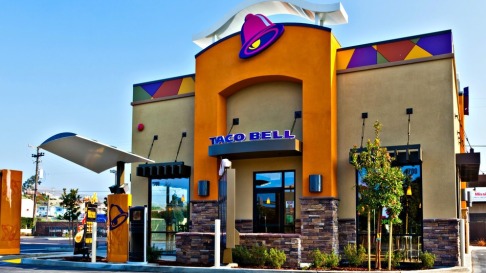 Every year there seems to be a new diet craze that sweeps the nation. Atkins. South Beach. P90x. You name it.

One of the biggest fads over the past year I keep hearing about has been the Paleo Diet. Also known as the “Caveman Diet”, this eating plan focuses on foods available 10,000 years ago. Fruits, vegetables, nuts, seeds, lean meats and seafood are the core of the diet. Items to avoid are dairy, grains, and anything processed (all things that are good).

It might surprise you that this fast food critic has never been a fan of fad diets, or any diet for that matter. I could certainly afford to eat a little healthier, but the restrictions the average diet is just too much for me. With that being said, the Paleo Diet caught my attention recently because it inspired Taco Bell to change up its menu.

On July 17th, Taco Bell rolled out theCantina Power Menu where “High Protein Meets Big Flavor”.  The Cantina Power Burrito and the Cantina Power Bowl each come in Veggie, Chicken, or Steak variations and pack at least 20 grams of protein while containing 500 calories or less. With cheddar cheese and sour cream, these items aren’t completely Paleo-friendly, but the high protein and fresh ingredients make the inspiration pretty transparent.

I took a trip to Taco Bell this week, resisted the urge to grab my usual XXL Grilled Stuft Burrito and instead ordered the Steak Cantina Power Bowl for $5.89 (Chicken or Veggie bowls went for $5.69). The bowl was packed with romaine lettuce, guacamole, pico de gallo, avocado ranch dressing, cheddar cheese, sour cream, Latin rice, black beans, and a double serving steak. It weighed in at 500 calories and had 29 grams of protein, making it the closest thing to “healthy” that I’ve ever gotten at Taco Bell.

A little less attractive than the ads

The majority of the Cantina Power Bowl was made up of the romaine lettuce and Latin rice, but all the flavors blended incredible well when I mixed it up a little. I’m inclined to go ahead and say this one has a solid flavor profile. The pico de gallo is “prepared fresh daily” and helped to keep the dish light. I could have used a little more guacamole and sour cream, but the dish already carried 22 grams of fat so I can understand why they used conservative dollops. I’m a sucker for their black beans and that inclusion was probably my favorite part of the bowl. Without the beans you would just be left sifting through lettuce and rice looking for the steak.

Overall, Taco Bell created a very good upgrade with the Cantina Power Bowl, though I would have preferred for a little more steak to be involved. It was filling enough for lunch, but if you are grabbing one for dinner you will want to add a taco or two to your order.

I reckon anybody sticking to the Paleo Diet already steers clear of Taco Bell, but who knows? Maybe they’ll climb out of the woodwork and give this moderately healthy, barely filling meal a shot.

A much better meal when mixed well

While the meal was enjoyable, you can be sure that I’m not going to convert to a Paleo diet any time soon.

The XXL Grilled Stuft Burrito is still on top!