Gary’s Pokemon Training Tips: How to Be the Very Best Like No One Ever Was (Even More)

That’s right kids. The Champ is back.

Hey boys and girls. Gary Oak the super Boss man is here and back in business. I’ve been busy lately being awesome, most recently via a mountain conquest with my fellow awesome pals Jack Donaghey and Barney Stinson. But now I’m here — again — to teach you fools how to be the very best like no one ever was…even more this time…at Pokemon training.

You undoubtedly have ditched the Gideon Bible in your bedside table and instead keep a copy of my first entry, Gary’s Pokemon Training Tips: How to Be the Very Best Like No One Ever Was on your person at all times. Good choice. There’s lots of good stuff in that. I’ve decided to take a little break in between my sets of ten thousand push-ups at a time to jot down a few more notes on how to be a baller Pokemon trainer. Now that you’ve got the basics down from my first post, let’s move on to more serious and advanced business.

Consider investing in offensive moves of “The Weird” types

These days, there are a metric ton of Pokemon with all sorts of weird types. Fairy? Steel? Whaaaaat the heck?

You’d never want to have a straight Bug or straight Poison Pokemon in your roster. Their average stats are an abomination. And you’d never want a dual type Bug/Poison because they are all awful and weak to even a delicate sea breeze. Dual types are oftentimes where it’s at, especially if you have a solid main type with a random secondary. Think about Venusaur here: Grass/Poison.

The three starter types are often a solid solo type: Grass, Water, Fire. Fighting and Dragon are another two that are very strong on average. But the bad solo ones are usually Bug, Steel, Fairy, Flying, Poison, Rock. Ground is a solid maybe.

There are exceptions to every rule, especially this one, but the main takeaway here is that regardless of what types your team covers, you’ll want to fill in the blanks through your movepool. This can help you out at the weirdly typed gyms and especially in the Elite 4.

Need an example? Feraligatr is a pretty decent Pokemon with well-rounded stats with a slant into Attack and Defense. It’s pure Water, and although it’s shallow movepool focuses on crappy Normal-type moves, you can make up for it with Waterfall or Aqua Tail. The important thing about using a Feraligatr properly, though, is about investing in Ice Fang and Crunch, moves that are Ice and Dark, respectively. This means that in addition to being able to demolish anything with a weakness to Water, it can also hold its own against Flying, Dragon, Grass (which it is weak to), Ghost, and Psychic. That leaves very few types that this thing can’t take on by its own.

For every single Pokemon, get the absolute best STAB move(s) possible

A god amongst mere ‘mons.

WTF is STAB, you say? It’s what my Scyther is going to do to you with its huge ass pincers. Just kidding, if a Scyther wanted to STAB you, it would use X-Scissor or Air Slash, which would either cut you in half or just like slash you, not stab. Scyther is Bug/Flying, and it gets Same Type Attack Bonus (STAB) when it uses a move with the same typing as one of its native types. As a Pokemon with innately high Attack, a Scyther can do some decent damage using any Physical move, like Slash for instance. But Slash’s type is Normal with 70 Physical damage. Not only does X-Scissor have 10 more Power, but Scyther will receive a STAB because it is a Bug-typed move. Get it?

What’s that? If I’ve spent so much time talking about Scyther, why is there a Jolteon up there?

STFU N00B! Jolteon is by far the best Eevee evolution and one of the best examples of STAB being used effectively. Let’s look at some of its Base Stats: 65 Attack, 110 Special Attack, 130 Speed. I only included Speed here to remind you that Jolteon is the 6th fastest Pokemon ever. Out of them all. Even Legendaries. Let that sink in. The only faster spikey thing out there is blue with red shoes.

Anyway, even though its speed is cray, Jolteon’s Special Attack is almost twice as high as its regular Attack. What does that mean? That means that sure, Thunder Fang is going to get a STAB, but it’s still going to suck. Even though it is Electric, it’s a Physical attack. You want to capitalize on the maximum effect that a move will have. To do that you need to consider not only the typing of both Pokemon and move, but the stats of said Pokemon and whether that move is Special or Physical.

What you REALLY want for Jolteon is Thunderbolt (90 Power, 100% accuracy) and/or Thunder (120 power, 70% accuracy). With its incredible Speed, super high Special Attack, and use of the best Special moves like these, Jolteon can STAB OHKO (Same Type Attack Bonus One Hit Knock Out) just about anything.

Last note: look at each individual Pokemon’s move pool on a site like Bulbapedia. Sometimes their best STAB move will be from a TM, in which case you’ll need to save up some money or find where the heck that TM is located in your region.

JK, one more note: Don’t forget if your Pokemon has two types. The Fire/Fighting Infernape has equal stats in Attack and Special Attack with even higher Speed. Therefore, it does well with Close Combat AND Flare Blitz or any other combination of high-quality Fire or Fighting moves, whether Special or Physical. But we’ll talk more about that delightful little monkey later…

The Ultimate Note: Before you try to dismiss this one as a minor thing, know that the STAB nets you a 50% — that’s FIFTY percent, as in half — increase in damage dealt. This translates to approximately 150% as good as it was before. Roughly half as much better. Which is real good. Real good. Thunderbolt has 135 base Power on a Jolteon. Think about that, kid.

Know what your Pokemon’s Stat Slants are 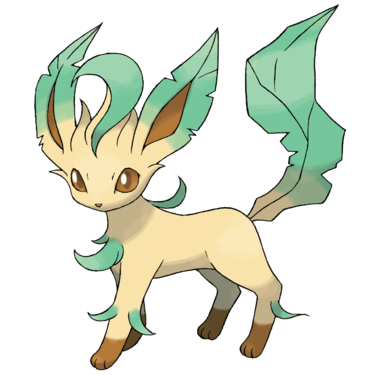 Battling is largely an offensive game, but not always and not with every ‘mon. Pay attention to each Pokemon’s stat distribution, ESPECIALLY Attack versus Special Attack.

I know what you’re thinking. “What’s the big deal, Mr. Oak? Imma get me a Leaf Stone to waste on my Eevee ASAP!”

No. No you most certainly are not. Your number one reason should be Jolteon. Your number two reason: look at that typing! Grass with high Attack instead of Special Attack!?

A majority of the best Grass moves — like Solar Beam — are Special. Only moves like Razor Leaf and Leaf Blade are useful on a Leafeon. Actually, those are literally the only two physical Grass attacks it can learn. Leafeon is a Grass Pokemon whose lowest Stat is ITS SPECIAL ATTACK! Doesn’t that just suck? It’s Defense is great but with pitiful HP it can hardly tank anything, especially if it comes up against Fire which will burn that thing so fast it won’t know what hit it!

The lesson here? Ditch Pokemon with stat slants that don’t work well with their movesets. Or similarly, if a Pokemon is built to be defensive with high HP — like Vaporeon or Snorlax — you don’t want to have them be your primary attackers, do you? Don’t play them like a speedy attacker. Play to their strengths, or at the very least, cover up them weaknesses.

Speaking of covering up weaknesses: During my travels in the region of Sinnoh, I had the great pleasure of being given a Chimchar by one of my adoring fans. What? No! I did not get it because Professor Rowan is friends with my Grandpa! Shut up! Whatever…

ANYWAY, when you get your Chimchar to evolve into Monferno and then Infernape, you have one helluva ‘mon on your hands. Don’t get me wrong, this monkey’s HP, Defense, and Special Defense are all pretty abysmal. But it maintains a 534 stat total with that sacrifice by having 108 Speed and 104 in both Attack and Special Attack. Fully evolved, the fire chimp also gains Fighting as a sub-type.

The extremely common Water type is Infernape’s worst nightmare, but if you’re feeling peckish, you can follow my lead with the following four moves: Close Combat, Flare Blitz, Sunny Day, and Solar Beam.

Sunny Day not only takes away the need for the charging round for Solar Beam, but it reduces the effect of Water moves by 50% and increases the effect of Fire moves by 50%. So if Sunny Day is in effect, that bonus will stack with STAB and double the power of Flare Blitz to a whopping 240 power! With Infernape’s Speed he is a dynamic sweeper on par with Jolteon that can also handle some Pokemon that would normally do really well against him.

Speaking of our pal, Jolteon: if you get the TM to teach him Rain Dance and rain is in effect, Thunder will jump up to 100% accuracy. That means that not only will this movie with 120 power be at 180 due to STAB, but it will also be one-hundred percent accurate! Rain Dance also does the same thing for Water moves that Sunny Day does for fire. Think about that for your Water type. Maybe get your Blastoise to work hand-in-hand with your Jolteon, eh?

Subtle little tricks like that will make your best Pokemon only better.

“Get weird, get Badges,” is what I always say!

Speed. Special Attack. Attack. These are the most important stats in that order. If you want to win, then you’ll want to win quickly. As a good rule of thumb, go for fast Pokemon with good stats in one of the two attacks. Your team should have 4 or 5 Pokemon with as much type coverage as possible like this. The other 1-2 should be a more defensive type that can at least handle the more tricky situations well enough for your to survive. If you can’t manage all of this, then at least look at the stat totals and make sure they are somewhat high for all your Pokemon.

In the event that a Pokemon you use does have well-balanced stats, don’t just get one offensive move of their type. Let’s bring back our hypothetical Feraligatr, who has pretty balanced stats. Let’s say he finds himself staring at an angry Rock Pokemon with wicked high Defense but crappy Special Defense like oh, I don’t know, a scummy little Geodude. Waterfall will only do so much because it’s a Physical Attack, but if you also have Surf in Feraligatr’s back pocket, he can plow right through that bad mammajamma with ease, mainly because of STAB.

You need Surf anyway to get around, right? Why not make it worth it?

Hold on to something for dear life

In this wild ride of life in the world of Pokemon, even the smallest addition can help you immensely. Always send your Pokemon into battle holding something. Berries are, of course, for sissies but in the event they are your only option, you might as well. Each of your Pokemon should enter battle holding something. Either get something that boosts their already boosted STAB native typed moves to overpower opponents or give them an item that boosts their weird-typed moves, like a Dark-boosting item that helps Feraligatr’s Crunch.

That’s about it for now, folks.